Signature of the II Agreement of Cooperation with Diputación de Toledo

The past day of  28 of March of the 2008 in Toledo an "II cooperation agreement" between the Pangea Foundation and the  "Diputación de Toledo".

The agreement of de cooperation is framed within the projects of the Pangea Foundation to promote the tolerance, 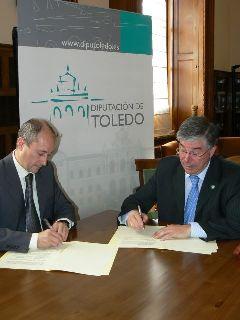 the understanding and the interchange between different cultures and that they have a historical patrimony common.

The ageement will have validity until end of the 2008. Prorrogable by mutual expandable ageement and for the activities that Toledo Park the future, who has their location in the municipality of Ocaña.

We use cookies to provide you with the best experience on our website. If you continue on this site, we'll assume you accept them.Accept Reject Read more...
Cookies
Necessary Always Enabled